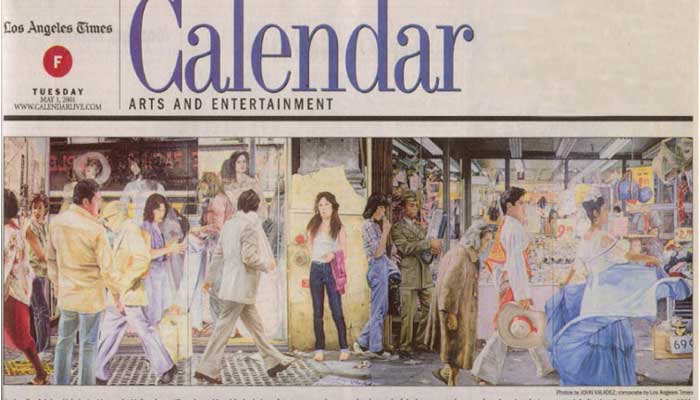 Paul Harter and Ramiro Salcedo, who for years sold clothing from the Victor Clothing Company's 3rd and Broadway location, also had a passion for art. They commissioned works of art and murals within and on the exterior of their downtown Los Angeles building. They also rented spaces to artists looking for studios and some of those artists became famous.

However, times changed. The clothing company's fortunes faltered and the building needed to be sold, but Harter and Salcedo could not bear to lose the murals. So a search began to find a buyer who would preserve the building art and other buyers who would purchase and own the special works.unfurnishers played a large part in facilitating sales to owners who would appreciate the original pieces and care for them.

One of those famous works was purchased by Peter Norton, a Los Angeles computer guru and major collector of contemporary art. He purchased the famous "Broadway Mural", John Valadez's landmark 60 foot long work in 10 panels that was painted in 1981.

The building hosts other famous works including Frank Romero's "Boy and Horse", Eloy Torrez's towering painting of Anthony Quinn as "Zorba the Greek", Kent Twitchell's 1972 piece "Bride and Groom", and "The Aztec Mural"-a 12 by 120 foot indoor mural completed in 1977 by Juan Garduño that recounts the history of Mexico.